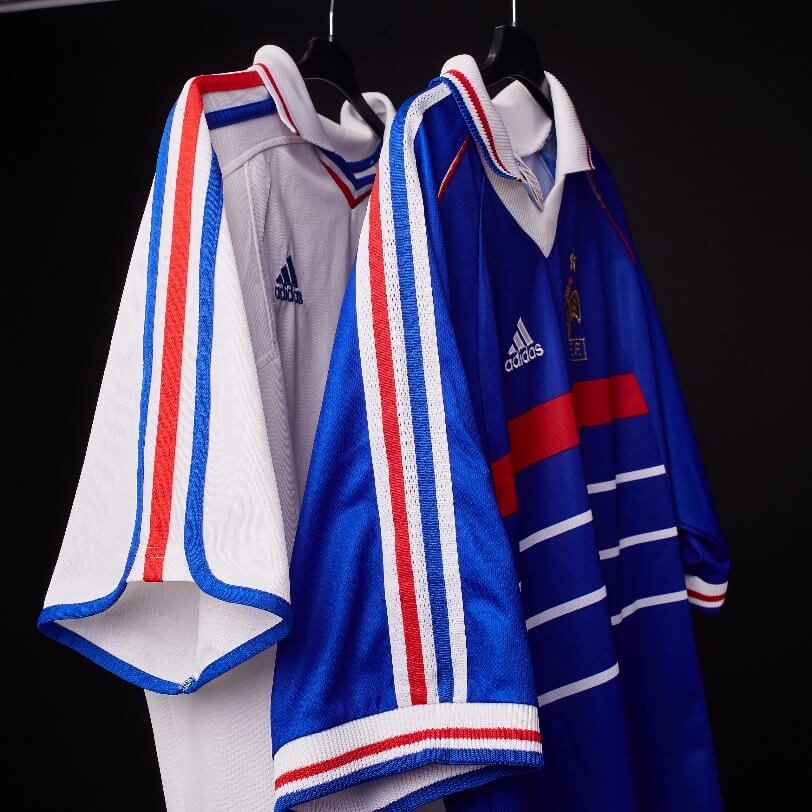 2004 year. Zinedine Zidane’s poster. It was the first shirt on which I drew attention to the specific design of the classic Adidas stripes. Red, white and blue printed stripes-it was really cool! Actually, one of the first own shirts was fake Zidane from WC2006. From that moment I became even more interested in these stripes. Unfortunately, after change of equipment to Nike, for obvious reasons, this stylish thing was lost… In general, there was a different technology for home and away shirts:

The second method is quite understandable-get white shirt and ably all stripes which you need. But how it’s possible to include red material into the blue shirt and make it maximally organically? There were two options, used by Adidas:

Just out of curiosity, I climbed up to look at different France which are at hand in big quantity. And I accidentally discovered that there was a third option! Before memorable win in European Championship 2000, Adidas proposed this method: At first, pieces of red and blue fabric are sewn. And already on them stripes are sewn on top. This is probably the most original version of the implementation of the classic French thing! It was well spent time:)

By the way, the same thing was with the national team of Yugoslavia, but a much shorter period of time and not caught on as its own highlight.

And, frankly, I miss the French stripes. This is the thing that I liked in those days when I was not interested in football either. For me, this is an example of one of the most successful design solutions, which has become a hallmark for many years.

Didn't find which you want on our site? Contact us and we will check our unexposed stock for you! Sign up here to get the latest news, updates and special offers delivered directly to your inbox.